“Rudi’s original tunes are sure to become classics.
The musicians on this project are fantastic – every tune is a gem.”
— Dennis Caplinger  (Banjo virtuoso – Bluegrass ETC.).

Rudi Ekstein has been in the music business for many years as a performer, producer, and studio owner. Now, on his album Carolina Chimes, released October 5, 2018 on Foxfire Recording, Ekstein showcases his mandolin prowess on 12 original instrumental tunes featuring an all-star cast of world-class talent. Some of the artists brought into the studio for this project include multi-GRAMMY Award Winner Stuart Duncan on fiddle and renowned guitarist Jeff Autry for the entire album, two time IBMA Bass Player of the Year Mark Schatz performs on all but one tune, long-time collaborator John Plotnik plays banjo on the majority of the album and steps in on Dobro on four tracks while GRAMMY nominated multi instrumentalist, Patrick Sauber takes the lead on banjo. 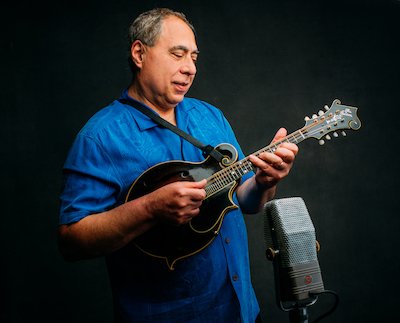 Many of the tunes on Carolina Chimes reflect Ekstein’s travels in this world, from his early years living in California and exploring the American West, to settling down in the western North Carolina mountain town of Asheville.

About a decade ago, Ekstein relocated to Asheville, where he continues to run the Foxfire Recording Studio (started in 1990), so he could play more bluegrass with western North Carolina roots musician, Billy Constable, for whom this album is dedicated. Constable, who passed away in 2015 of cancer, was best known for his three-finger-picking banjo technique and his vigorous acoustic guitar leads. A couple of songs on this project were written in his memory.

Rock ‘n’ roll music and bluegrass music from the Appalachian Mountains have had a big influence in Ekstein’s musical life. Within weeks of arriving in the area, Constable introduced Ekstein to many players in the WNC pickin’ scene. Both were in the band Blue Wheel Drive, along with bassist Rob Parks, and all three went on to perform for two years with The Bobby Hicks Band. Parks makes an appearance on Carolina Chimes playing “Rockalachia”, a tune BWD performed live that is reminiscent of the boogie-woogie style of bluegrass played on the mandolin in the 1940’s by the Father of Bluegrass, Bill Monroe. Another bluegrass buddy, Seth Rhinehart, also rocks the banjo on that tune as well as one other cut Rudi wrote in North Carolina.

Throughout bluegrass music’s 70-plus year history, albums of all-instrumental tunes have been recorded and released, showcasing the amazing level of artistry found in the genre. While singers tend to write songs that require lyrics brought to life by vocalists, instrumentalists of all stripes are prone to write tunes and melodies that let them cut loose and have some fun.

That is the case with Carolina Chimes as Ekstein has put together an upbeat collection of bluegrass barn burners performed with great pickers who help to bring these unique cuts to life. Unselfish and smart, Ekstein lets his collaborators do what they do best here. The result is a fast-paced recording that will remind you of the power of bluegrass music.

“The most obvious parts of everyone’s life have been depicted in a bluegrass song,” says Ekstein. “The bluegrass tunes I’ve written for my records over the past 30 or so years are mostly named after people, events, or something important that happened in my life. That’s just part of my love for bluegrass.”

“I have known Rudi for a long time. Having lived in California for several years we used to cross paths alot. Rudi, like me, as we have grown older, seems to have a calling to write tunes. Bill Monroe did the same thing. The 12 tunes that Rudi has put together are winners. These musicians that Rudi picked to play on his project are top notch. Surrounding yourself with good musicians is the key, and Rudi, you found the right key.”
— Byron Berline (GRAMMY nominated legendary fiddler for Bill Monroe).
“I am enjoying listening to this collection of original instrumentals, all composed by Asheville NC mandolinist, Rudi Ekstein. Rudi has put together a nice mixture of tunes that take us from up tempo fiddle numbers to sad mountain laments with a gypsy jazz feel thrown in for good measure. I am honored to be included in this stellar lineup of world class acoustic players from around the country. This project is superbly crafted using the finest instruments, played through the finest microphones by virtuoso musicians. Great job Rudi!
— Jeff Autry (The Edgar Loudermilk Band featuring Jeff Autry).
“Rudi Ekstein has written a great collection of new bluegrass instrumentals and as writer, producer, engineer and musician, recorded this album and maintained a very high degree of quality at every step of the production process! The mix is wonderful and Rudi’s cast of musicians is stellar!”
— Gene Libbea (Multi GRAMMY award winner – The Nashville Bluegrass Band)

Recorded and Mixed by Rudi Ekstein at
Foxfire Recording Studios, Los Angeles, CA and Asheville, NC
Mastered by Tom Scheponik at The SoundLab

Publicity and Radio by Erin Scholze at dreamspider.net

Dedicated to my wife, Laurie, and daughter, Jessy

In memory of Billy Constable

Photo by Sandlin Gaither at sandlingaither.com